It’s Monday morning and yet another traffic jam in Melbourne!
The cause a light truck that had lost its load of glass at a round-about!  No one hurt thankfully but a hundreds of people are late for work because one driver didn’t secure his load properly.

It has been estimated that up to 25% of accidents involving trucks are caused by inadequate cargo securing. In Germany about 2,300 accidents to heavy goods vehicles per year are the result of improper or insufficient cargo securing (Deutscher Verkehrssicherheitsrat (German road safety council) 2008a).

If the truck had been over 4.5 tonne GVM in Victoria, it would have triggered a Chain of Responsibility investigation!
So that the company that loaded the driver would also be held to account – and why shouldn’t they?  The company that loaded the truck or allowed it to leave their site with an improperly restrained load had implicitly decided to put ignorance, profit or expediency ahead of their safety obligations to the general road users.

Every month Vic Roads removes 80 tonnes of debris from their roads!
Debris that causes traffic jams that stuffs thousands of drivers around every month, or in the worst case damages their cars – (estimated at 200 cars per annum in Australia hit by items falling from commercial vehicles!).

Chain of Responsibility – WA Got it Right! 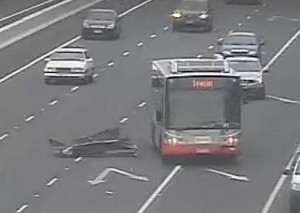 it is estimated that nearly 70% of small commercial vehicle metropolitan loads are not adequately secured.

Companies that engage or use small commercial vehicles are getting an implied commercial benefit if the driver can get the load to the delivery destination quicker.   So why shouldn’t they be held to account if something goes wrong?  Why should their only be an upside benefit to the company and no risk by turning a blind eye to manner in which the load is delivered.
This is why Western Australia got it right!  They recognised the limitations of the national Chain of Responsibility laws and removed the 4.5 tonne GVM application limit.

Ultimately it is about Road Safety

Ultimately it is about making our roads safer and more productive.  If the Chain of Responsibility laws were equally applied to all commercial vehicles then companies engaging or using such vehicles would be forced to ensure that their contractors or staff comply to the road rules.  In the same way they are forced to ensure that they comply to the OHS rules on their site.  Because that is what the Chain of Responsibility is about – extending the same principals of duty of care from the site to the road.
It is time for the other States to consider removing the 4.5 tonne GVM limit on Chain of Responsibility and make the roads safer for all road users.

Mike is qualified in both Civil and Mechanical Engineering, with Post Graduate qualifications in Logistics and Business Administration and is a qualified RABQSA/Exemplar auditor. The initial phase of his career involved public roads and transportation authorities in technical and management roles with both VicRoads and the Victorian Ministry of Transport and designed Melbourne’s time public transport system Mike then moved into private industry and over several years, held General Manager positions with major logistics service providers with turnovers in excess of $500 million. As his expertise and knowledge grew he moved into consulting and became Principal Consultant with Dawson Consulting, one of the largest Supply Chain and Logistics consulting companies in Australia Mike is now Managing Director of LATUS Business Solutions, which is a highly regarded Business Improvement practice, operating in 3 major area; • Supply Chain & Logistics design; • Compliance implementation & management; • Risk analysis& Safety management • Leading training provider (RTO) in the area of Lean Logistics & Business He has been a Director of transport and logistics industry associations in Queensland and Victoria.