Doctor Mark Gregory from RMIT,  is a high profile expert on the National Broadband Network (NBN).

In a scathing article in the Technology Spectator, Dr Gregory makes some points that are equally applicable to the Logistics Sector, specifically in relation to Chain of Responsibility.

Recently in the media there has been the reported comments of iiNET refusing to sign up to the NBN broadband agreement.

The reason is that the NBN Co broadband agreement includes a Customer Service Guarantee (CSG).
The CSG provides for fines to service providers such as iiNET, even though they do not have control over the risks to such delivery.  For example paying for late delivery to customers, when such delays could be caused by the NBN construction partners via slow delivery, another asbestos type delay or another local council somewhere with some new looney rule.

It is also interesting to note as an aside, that the incredibly slow pace of the roll out is because their is no incentive for the construction companies to do it faster.

Application to Chain of Responsibility. 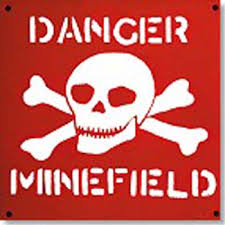 have little control over the risks.

Such guarantees do not have to be formalised but can be punitive outcomes for not meeting a requirement.  For example say a transport company delivering on behalf of a manufacturer to a reseller.  The reseller allocates a delivery slot time, the Transport Company if it fails to meet the slot time, may be delayed on site for a significant time (that costs money) or may in some cases be fined.

The issue is that the Transport Company has no control over all the risks, such as delays in loading by the manufacturer, road accidents delaying the planned travel time etc.

So the Transport Company (or a subbie) to make up the time delay may be forced to speed to be on time to the delivery slot.

Predictable Outcomes under Chain of Responsibility.

Under Chain of Responsiblity (including WA Compliance and Enforcement Legislation) includes the requirement that companies and/ or individuals were reasonably able to “predict and prevent” an even occuring.

All persons within the Chain of Responsibility need to demonstrate (within their own roles):

So in the example of the Transport Company above the imposition of an implied or actual service level ,  is a “predictable outcome”.   As in a low margin industry such as transport, fines really hurt and time delays not only cause potential financial loss they can also cause issues in compliance to Fatigue Management.  It is reasonable to predict that a service level agreement implied or stated will cause a transport company or its subbie driver to take risks to ensure that level is met.

It only takes one accident, one speeding truck driver being caught to potentially trigger a CoR or C&E investigation.  An investigation along the entire Logistic Chain in which the driver is operating.  Already in NSW, over 4500 charges under Chain of Responsibility have been laid.

Various State Governments have or are implementing dedicated Police Intelligence units to identify logistic chains and their operators that are or could be breaching the law.   And bear in mind, that the Police in WA and some other states have significantly increased powers:

The Chain of Responsibility legislation gives authorised officers certain inspection and investigation powers over vehicles, premises and people in order to enforce the mass, dimension and load restraint requirements.
Vehicles can be stopped, have their movement directed, moved (by the authorised officer), examined, searched, vacated and grounded. The officer can also order
through the issue of a notice that breaches in vehicle standards must be rectified.
Premises can be entered, inspected and searched, and documents and information can be seized or copied. Persons at the premises can also be ordered to assist in any enquiries and searches.
People may be required to divulge their name and personal details, produce documentation and driver’s licence, and are obliged to provide any other relevant information (within the scope of the law) (source Main Roads WA)

If you don’t have reasonable control over the risks that effect a Service Level agreement, then like iiNET’s Compliance Executive it may pay to hold off on signing.  The difference is whereas it only hurts iiNET financially, in the Logistics sector if can hurt both the Company and potentially its individuals via fines, prohibitions from the industry, commercial benefit orders and far worse.

Mike Wood, Managing Director – LATUS: Logistic Risk Specialists Mike Wood is the recognised Australian Specialist on Chain of Responsibility Legislation and its Impacts upon the Logistic Industry. Since 2003, Mike has been heavily involved in Chain of Responsibility (known as Compliance and Enforcement in Western Australia). Mike is frequently interviewed or comment sort by Australian Media outlets, as well as providing expert witness testimony in legal proceedings. Most recently engaged by the Western Australian Government to help educate WA businesses on the new Compliance and Enforcement legislation and its impacts on them. Mike regularly advises Governments and Business across South East Asia and Australia on Logistic Issues, and was particularly involved in the Chain of Responsibility legislation, and codes of practice. Mike’s expertise extends to multiple facets of the Supply Chain, having undertaken projects such as, Integrated Logistic Chain Design, Australian Disaster Management Response Logistics, Coal Chain designs, Port operation & infrastructure, Logging Operation design, Sugar production, livestock movements, logging etc.